We have all seen them, the thin little cracks snaking along at an angle from the corner of a window or doorway.  The nail pops of newer construction, the tape separation and cracking.  It’s so unsightly!  Why does it happen?? Is there something wrong with my house?  Cracked drywall can appear unsightly and draw away all the focus from the décor of your room. But back to the main question: What is causing those cracks? It could be a number of things, but today, I am going to talk about one of the most common causes of drywall cracks, and that is house settling. 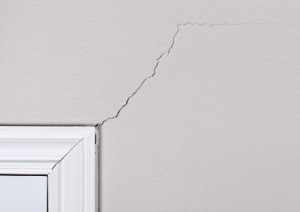 Some of the things that can cause the drywall to crack include: the house settling, poor drywall installation, moisture behind the wall, objects on the wall causing it stress, and cracked paint. There are few things that you need to watch out for and some remedial measures that can be taken to nip the problem in the bud. Because there are many reasons why cracks may be caused in drywall, as soon as you see a crack, even a hairline one, in your drywall you should repair it immediately. If left unattended, this can grow into a major problem that might lead to weakening of the wall and eventually the entire structure. It will also involve major expense to repair it at a later stage rather than tackling it at the start.

All houses settle down after some time, but this is not always a uniform process and at times, some parts settle before others. Because of these different rates of settling the shifting structure can lead to cracks between the wall and ceiling due to the downward movement. Yet another spot to watch out for cracks is the top edge of windows and door frames. These are usually diagonal and might increase over a period of time.

Once you understand why cracks happen, then you can keep an eye out for the start of new cracks and be ready to make permanent drywall repairs sooner rather than later. There are some cracks that can’t be easily repaired. What’s more, it is hard to totally disguise some cracks. Large houses are built with joints in them to relieve movement, similar to the joints in our bodies. .

As I stated before drywall cracks can sometimes be found above the corners of doorways and windows. Nail pops are also relatively common. You may also notice drywall cracking in the ceilings on the uppermost floor of your house. While all these problems are caused by settling there are different reasons that they occur.

Next we will talk about how settling cracks may appear in you your home and how to identify them when they can occur in your drywall, all of which your local Andy onCall handyman can repair with one quick call.

Got a project?
Don't wait!

Live in or near Evanston?
Get help fast!

Want to own an Andy OnCall franchise?